#Bike2Work and change how you commute during Transport Month

What is your Transport Month resolution this year? 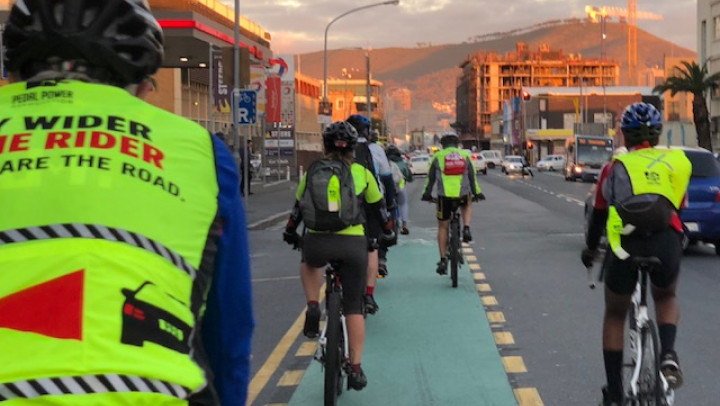 It’s 08:30 on a Monday. You’re in your car, inching towards the city, behind thousands of others doing the same. You switch on the radio to catch the news headlines. It’s a familiar story:

Rail infrastructure in Cape Town is being vandalised. Minibus drivers are being attacked and bus drivers are on strike. With the public transport system under such pressure, more commuters have taken to the road in their private vehicles. The roads are gridlocked. You’ll be late to work - again. You send a Whatsapp message to your colleagues. They respond. They’re late too, stuck in another queue on another road somewhere across the city.

At Open Streets, we have a solution. (Granted it is not our idea as there have been loads of people running 'bike buses' in the past)

In April this year, we launched a series of #Bike2Work bike buses. The aim is to encourage people to use low carbon transport, especially non-motorised transport, and specifically bicycles, when commuting to work. The #Bike2Work initiative has continued to gain momentum since it started.

October is Transport Month, which makes it the ideal time to ramp up the #Bike2Work initiative. Transport Month was conceived in 2005 during the Transport Lekgotla to raise awareness of the economic impact of a safe, affordable, accessible and reliable transport system. To mark the month, we’ll be hosting a #Bike2Work bike bus every Friday, rather than just once in the month. Each week we’ll invite a special guest to join us and to share their  passion to improve commuter cycling in Cape Town. We are excited to be working with Pedal Power Association, Bicycling Empowerment Network and Bicycle South in rolling out this initiative.

What is a bike bus?

A bike bus is a group of people cycling together using a set route.

How do I join the rides?

It's easy, you can join a bike bus in Claremont or in Gugulethu. Check out the guideline below:

We will meet at Palmyra Junction, Claremont at 06:45 am and depart at 07:00 am sharp for Seattle Coffee at the Standard Bank Towers (next to Cape Town Civic Centre). You can check out the route here.

To join the #Bike2Work bike bus from Palmyra Junction please sign up here.

At the same time, another #Bike2Work bike bus will depart from from Gugulethu bound for the the same destination in the CBD. Meet at the Gugulethu Police Station at 06:15 am, and depart at 06:30 am sharp. You can check out the route here:

To join the #Bike2Work bike bus from Gugulethu please sign up here.

FROM THE NORTHERN SUBURBS:

The Table View bus leaves from Bayside at 6:45 am and meets up with the busses coming from the Northern suburbs, including Edgemead and Bothasig, at Woodbridge Isle, Milnerton, at around 7:05 am. There are 2 busses in the afternoons going home, 16:35 pm and 17:15 pm, and they meet across the Train Lodge just before the Nelson Mandela flyover. You can check out the route here.

To join the #Bike2Work bike bus from the Northern Suburbs please sign up here.

Join us! And, to spread the message and encourage more people to opt for a more sustainable, fun way of getting to work, please like, share, comment, and invite colleagues, friends and family.