#Bike2Work from Gugulethu and Athlone 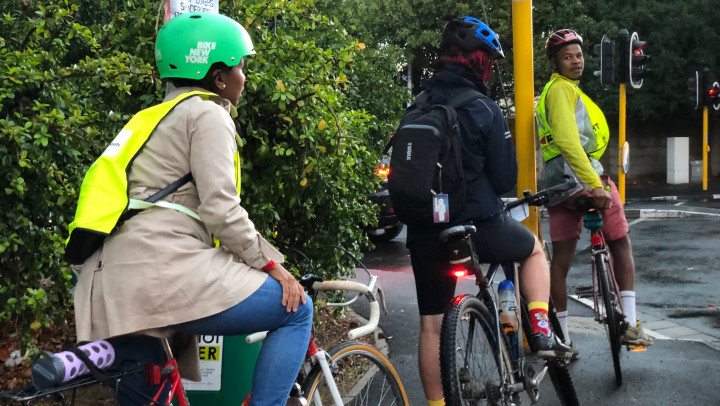 Gugulethu is 20km from the Cape Town CBD. Thousands of people commute from the area into the city every day. But getting to work in crowded taxis on clogged highways, or unreliable trains, can be difficult and expensive.

Building on the work done by Bicycle South, we want to support a commuter cycling culture in Gugulethu and Athlone. That’s why we’re inviting you to join the #Bike2Work bike bus, which will travel from Gugulethu to the CBD via Athlone on the last Friday in July and August.

The #Bike2Work campaign encourages people to cycle to work. A bike bus is a group of cyclists cycling together using a set route. Participants can join the bike bus along the route and exit the bus at their ‘bus stop’, or their place of work.

Cycling is a safer, cheaper, more social alternative to commuting by traditional means. Bulelani Jodo, a regular bicycle commuter, explains the benefits: “The #Bike2Work bike bus has great potential benefits for the people of Gugulethu, which include a healthier community, saving on rising transport expenses and building stronger relations between Athlone and Gugulethu.”

The Gugulethu and Athlone #Bike2Work bike bus builds on the previous successes of bike buses from Palmyra Junction in Claremont to the Cape Town CBD.

Everyone is invited to join the first Gugulethu #Bike2Work bike bus on Friday 27 July at 6:15am. It will depart from Gugulethu Police station and end at the Now Now Café, 95 Longmarket Street. Check out the route map here.

How do I join in?

Simply meet at Gugulethu Police Station on the day or call, WhatsApp or email Sindile Mavundla on 084 551 2053 or sindile@openstreets.co.za. You can also sign up here.