The series returns to various locations across Cape Town on the last day of every month from October 2018 to April 2019, taking a break in December 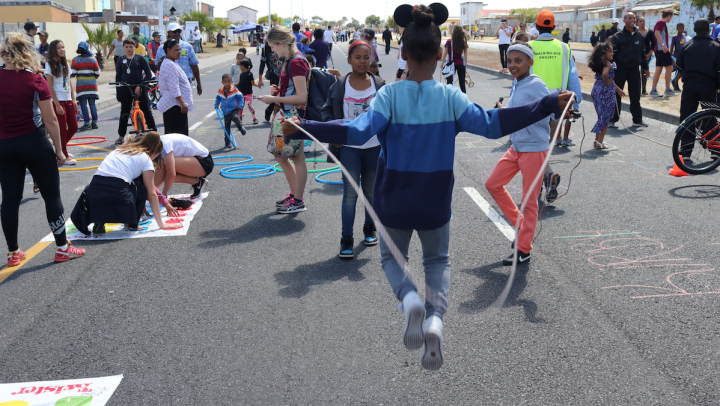 In 2018, the popular Open Streets Days take place in Woodstock on 28 October and Bellville on 25 November. The series starts again in 2019, with Open Streets City Centre on 27 January, Langa on 24 February and Mitchells Plain on 31 March.

Rebecca Campbell, Open Streets Operations Manager explains the rationale behind returning to past locations: “Open Streets turns five this year, and the Open Streets Days have been successfully tested in these locations during that time. Local residents have expressed their support and by returning, we hope to strengthen our relationships with our partners, and create stronger connections between communities, while determining how best to scale the programme to more communities across Cape Town.”

Since the series was launched in Observatory in 2013, Open Streets Days have grown in popularity, and have brought together people from all walks of life from, and in different communities. Thembinkosi Matika, Centre Manager at Langa Project Playground, said: “We are looking forward to participating in the upcoming edition of Open Streets and using it as a platform to highlight our existing programmes and connect with children across Langa.” Langa has hosted three Open Streets Day.

Bellville has hosted two Open Streets Days, which closed streets to cars on Kruskal Avenue and Voortrekker Road in 2015 and 2016 respectively. Abdullahi Ali Hassan, Vice Chair of Somali Business Association, said: “I am thrilled to hear Open Streets will return to Bellville. The two experiences we have had thus far have shown the potential this programme has in bridging the divide among the different communities who inhabit this part of the city. I look forward to taking an active role in bringing new energy into the upcoming Open Streets Day in Bellville”

The 2017-2018 season tested longer stretches of road, along Main Road from Observatory to the City Centre and Eisleben Road in Mitchells Plain. In the 2018-2019 season, the focus will shift to shorter, more compact Open Streets routes, with parallel activities that promote non-motorised transport. Now in its fifth year, the programme continues to build public support among local residents as well as the private and public sector across Cape Town.

Open Streets was also recently recognised as a winner in the Transformative Urban Mobility Initiative (TUMI) Challenge, awarded at the recent Women Mobilise Women Conference, a side event of the International Transport Forum, held in Leipzig, Germany, in May 2018.

Referring to the return of Open Streets to the Cape Town CBD, Tasso Evangelinos, CEO of the Cape Town Central City Improvement District, said: “Open Streets is a powerful opportunity to demonstrate the potential of a CBD that belongs to everyone. We are looking forward to working not only with the organisers but with all the businesses and interested residents in the area to ensure this is another successful Open Streets Day”

Clifford Chateau, Principal of Duneside Primary School in Mitchells Plain, said: “Earlier this year, Open Streets enabled us to connect our school with the street and this is something I want to see happen on a regular basis. The next Open Streets Day in Mitchells Plain will be a great opportunity to consolidate the support and attract more youth to take a proactive role in the programme. It also provides a valuable platform for community organisations to showcase their projects.”

Says Bevel Lucas of the Woodstock Residents’ Association: "I'm thrilled to learn there will be another Open Streets in Woodstock. I love how the event brings people from so many walks of life together – including the diverse immigrant community in the area - to walk, play, cycle, dance, skate and laugh.. It's wonderful to walk down the middle of main road and see the neighbourhood with new eyes: admiring architecture I hadn't noticed, bumping into friends and neighbours along the way, and experiencing what it could be like if streets were for people, not just cars. Can't wait for October!"