A new meaning to life on the street...

Reflecting on five years of change-making in the streets 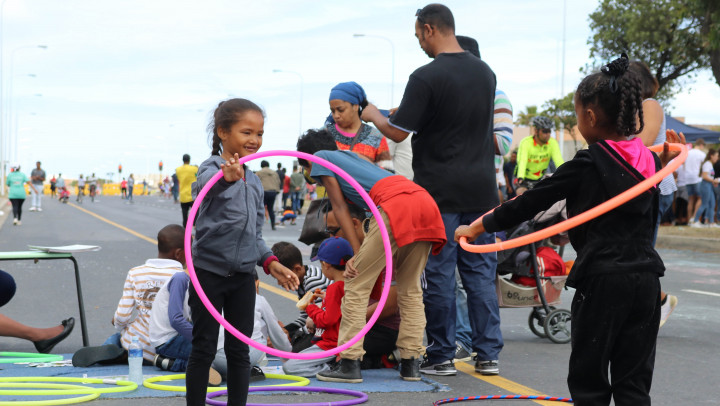 First published in the Cape Times, 20 July 2018
Text and photo by Rory Williams

Since 2013, we have made it possible for residents in six different neighbourhoods of Cape Town to open streets for thousands of people to experience streets as public spaces for everyone. On each of those days, we have been inspired by the way ordinary Capetonians have embraced the culture of public and street life. We have seen the streets empty of cars but full of families and friends walking, skating, dancing, exploring and playing. They have celebrated their neighbourhoods and immersed themselves in a car-free experience, even if just for a few hours at a time.

That’s how residents have written Chapter One of the chronicles reflected in our long-term mission to change the streets in our city.

Open Streets was formally registered as a Public Benefit Organisation in 2013. Our aim is to radically increase the use and ownership of streets as public space by people and communities across Cape Town, with the ultimate goal of bridging the spatial and social divides of our city.

Cities are for bringing people together, enabling them to interact in their own communities and elsewhere. However, unsafe streets, dominated by cars and criminal elements, exacerbate spatial divides, inhibit affordable forms of transport, and prevent people from fully using what the city has to offer. People stay indoors. When people take ownership of streets, they engage in activities previously made impossible by threats to safety or limited mobility.

As we reach our five-year milestone, we have taken time to reflect on how residents have expressed the benefits of Open Streets.

We have seen how people want to explore streets, and experiment with them as places of value. Citizen action is a powerful catalyst to soften entrenched beliefs about what makes a safe place. It can also expose the possibilities of thinking differently about the kind of value streets can provide.

From the beginning, we have sought to create the conditions that will help us achieve that aim.

Our first five years have been about experimentation and defining our role within the local context. Today, Open Streets is a growing, dynamic, organic movement of street-minded citizens. We have collected valuable lessons, and our reputation as a change agent has expanded. We have also been internationally recognised. In May, Open Streets was one of 10 innovative mobility projects to be selected as a winner of the global Transformative Urban Mobility Challenge (TUMI) out of 100 submissions from 30 countries.

Our programmes have expanded, too.

Open Streets Days have brought to life the streets of Observatory, Woodstock, Bellville, Cape Town CBD, Langa and Mitchells Plain. Over the next 10 months we will be revisiting the last five of those locations, opening up the streets again in those neighbourhoods in October, November, January, February and March, respectively. Through repetition on every last Sunday of those months, we will be a step closer to elevating the potential role of streets in the public mind.

Through our advocacy and campaigns, we seek to influence policy and public conversations about how our streets are used. Working with the WWF Nedbank Green Trust, we aim to increase the use of public and non-motorised transport in our cities. The Talking Streets and Street Minds programmes provide opportunities to consider needs, possibilities and solutions for how our streets are designed and used. And the Street Lab programme directly encourages residents to actively think about how they move around the city.

For five years we have been using these activities to test ideas about how to create value in public streets. We have also sought to share this knowledge across communities so that each one of us can take advantage of everything the city offers.

We base all of our programmes — including the Open Streets Days — on this principle. Many of our activities before and after Sunday street openings are designed to help people imagine new possibilities, and to take over with whatever programmes meet their community needs.

For instance, we have invited people to keep a travel diary for short periods and to reflect on every daily trip. Although simple, this exercise has been a good conversation starter and the data collected has helped us to deepen our understanding of individual travel patterns. Similarly, through our bike2work bike buses, we invite people to get on a bicycle, encouraging people to do something that many have wanted to do but who needed more motivation or support.

We don’t want to claim such initiatives for ourselves. Rather, we want to encourage a more visible groundswell of activity that contributes to the creation of networked groups, and encourages others to try cycling to work or for short trips.

We are most gratified to see how our network of supporters has expanded, and how other initiatives have continued on their own. We have learned that the most important factor in embedding Open Streets as a social institution in Cape Town has been collaborating with other groups who are already active in different spheres of street life.

This partnership network reaches corners of government, business and civil society across Cape Town. The work we do is aimed at giving people in all these sectors the tools they need to consider how streets could be redesigned, repurposed and reused. This means, ultimately, that it is not our work but the work of hundreds of cheerleaders, volunteers and interns who raise their hands and bring their energy to every aspect of our programme.

Working collaboratively allows Open Streets planning to become both the means and the end. In other words, we aim to bring people together to interact on public streets, and we demonstrate the value of this by bringing them together in the process of exploring community needs, desires and opportunities. We want to ensure that our processes are not about extracting from communities but building them up; and not about taking over the work of other organisations but complementing them.

These partnerships, and the interplay between them, form the sturdy framework that supports us. And if you, or someone you know, is involved in public space at the grassroots level, we would like to hear from you.

Ultimately, change becomes possible when government creates an enabling environment for people to use and own streets as public space, and when people organise and take collective action to achieve a common purpose. Open Streets is proud to be a catalyst in that process – not only in creating places to explore together, but in developing the shared identity that defines any community. As we step in to the next chapter, we will continue to bring people out into the streets that should always be theirs to enjoy, no matter who they are or how they move. And we invite everyone to join us.