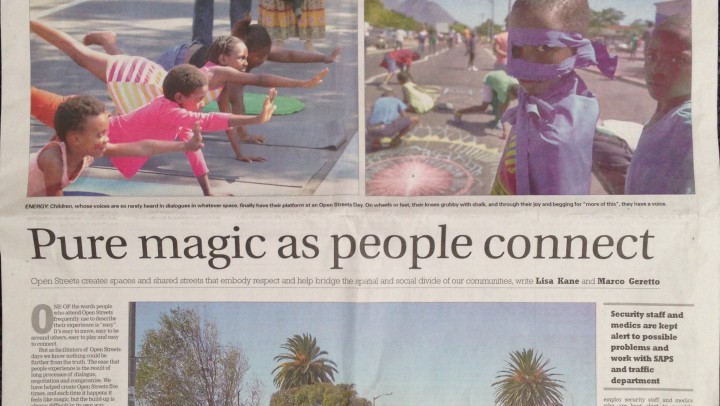 One of the words people who attend Open Streets frequently use to describe their experience is "easy". It's easy to move, easy to be around others, easy to play and easy to connect. But as facilitators of Open Streets days we know that nothing could be further from the truth. The ease that people experience is the result of long processes of dialogue, negotiation and compromise. We have helped create Open Streets five times, and each time it happens it feels like magic, but the build-up is always difficult in its own way.

One of the reasons that closing a street to traffic and opening it up for people is such a difficult process is that the use of public space is as intensely personal as it is public. As individuals we feel a sense of entitlement to the spaces we use every day and we don't like being told what to do. At the same time, the use of public space is deeply political because our actions, and the rules (written and unwritten) that govern the use of public space, demonstrate how we relate to others. Changing the way our streets are used, even on a temporary basis, requires a renegotiation of the status quo and brings into sharp focus the power relationships that play themselves out in the streets every day.

In the run up to an Open Streets day the team begin a dance. We don't start out with a preconceived idea of what a particular Open Streets will look like. What we try and do is create a platform that local communities can use and mould into what Open Streets in their neighborhood means. We therefore initiate a tricky dialogue between street users, residents, organisations and local government. We work our hardest to facilitate these conversations in a way which enables all to be heard and to reach some new temporary consensus. The debate about the street happens on a number of platforms. Traditional media can go a long way in informing people, but it only goes so far. Social media too allows some brief conversation but it is closed off to many and its rapid-fire nature means it is not well-suited to the sorts of deeper discussions that need to take place.

We have learned more direct methods of engagement are crucial. Our walking series Talking Streets and community meetings, usually held weekly in the six weeks before an event, offer opportunities to experience the street together and for grievances to be aired. The scale of participation varies from a small handful of concerned residents to a couple of hundred (over 450 in the run up to Langa). But once-off events also have their limitations, so in Langa we employed someone to work solely on building one-on-one relationships. She (Norma) spent two months on the ground going door-to-door and talking through queries and problems in real time with (as she said) gogos and mamas.

Another set of conversations is held with the regulators and enforcers of the formal rules and regulations that govern public space.  Engagements with the traffic, events, and disaster risk management departments are a prerequisite for any public event but they too are time-consuming and sap the energy of the facilitators. Rather than being a gauntlet for events organisers they too should open discussions which centre around opportunities, solutions and compromise in a world of challenges.

Despite all this intensive groundwork, on the day there are always some individuals who insist that the street, road or parking space is theirs alone and this requires us to have another set of conversations. We train and pay marshals, most of whom are local residents, who patiently explain the concept of Open Streets, welcome visitors and redirect drivers onto alternative routes. In the public interest, we employ security staff and medics who are kept alert to possible extreme problems and work with SAPS and the local traffic department to ensure that there is a happy balance between legal enforcement and judicious oversight. Finally, is our team of volunteers made up of people committed to the vision of Open Streets. In Langa this group outnumbered the paid staff. They were the eyes and ears on the ground but also, perhaps most significantly, they held and were true to the vision of what Open Streets can be.

In truth then, Open Streets days are not easy. They are less of an event (which suggests corporate sponsorship and agendas) and more of an active conversation about public space that results in a day of community action in the street. Not only is it important to have these sometimes difficult conversations in public spaces, but it is more important that our multiple languages and positions are translated into action and experienced on the canvas of the street.  Each Open Streets is therefore a unique occasion and a reflection of those who generously contribute their time, energy and resources to realising the space. 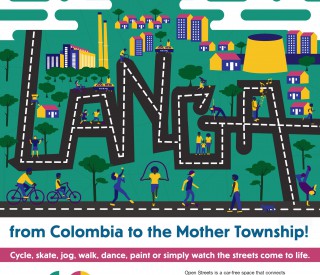 General
Open Streets in the News