Sharing space can shape a new world of connectivity

When we realise the power of a collective voice, change is possible 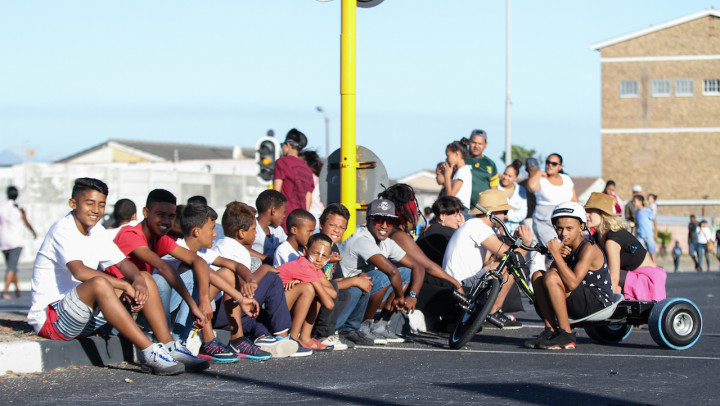 The City of Cape Town recently noted that in the first four and a half months of 2018, there had been 145 protest actions in the metro. This was a big jump from the 84 experienced in the same period last year. These protests have often been violent and disruptive. Roads have been blocked, property burnt, and people injured.

This response has clearly evolved from high levels of frustration at not being heard; but it has been normalised and in the public domain, 'service delivery protests' are simply part of the South African reality. They are no longer exceptional. When digging deeper, we might discover that what lies beneath is not only frustration, but also a disconnect with our space, our city and each other.

This is why suspending reality is sometimes a healthy exercise; which is what happens during Open Streets Days. In places like Mitchells Plain, Langa and the Cape Town CBD, streets are closed to motorised traffic for a day, and people come out to engage with each other and share the space. These occurrences are considered out of the ordinary. Our day-to-day reality determines what we expect from our neighbours, our authorities and ourselves. Currently, connecting with each other - let alone owning our cities - appears to be unreal; not the “South African experience.”

The fact that most urban South Africans, no matter where they live, do not feel that they own their public spaces, is an obvious manifestation of a systemic problem. Violent protests are symptoms of much bigger problems in underlying systems that only fundamental changes will fix.

In the lead-up to the first Open Streets Day in Mitchells Plain in 2015, a local resident told us how her 10-year old son had never played in his street because it was so unsafe. He was certainly not the only one. When the day came, however, the boy was there on his bicycle, just a few hundred metres from his house, pedalling through an area usually not accessible to him. For a few hours, that space was his.

Unfortunately, this is the exception in his experience. When the day was over, the bicycle would have been packed away and the street would once again have become off limits.

It is incongruous to expect this boy to grow up as a self-determining citizen, feeling that he has a place in this city, when he has always been disconnected from even the street outside his house. How do we create an environment for him and a whole generation to feel that they can be active in their communities in a positive way?

A systems approach to this problem starts by recognising that we cannot just treat the symptoms of societal issues, but need to try and understand what beliefs, laws, narratives and structures perpetuate them. Both private and public sector interventions often tend to focus on the former. This is of course perfectly legitimate. We cannot, for instance, allow people to starve while we work towards solutions to systemic poverty. But what are our options for addressing urgent needs, while focusing on systemic change?

We have to be bolder and build networks and relationships that move people's thinking towards possibility and encourage an active citizenry. In our own experience, providing a platform to experience streets safely, freely and inclusively, if only for a short period during Open Streets Days, can play a role in the systemic change required in Cape Town. By enabling ourselves to re-imagine and experience how things could be, we give ourselves the gift of occupying – even temporarily - that space of desired change. Where, if not in inspiration and hope, does the impetus to change the status quo begin? Our mission is therefore to radically increase the use and ownership of public space to ultimately help bridge the social and spatial divides of our city.

Specifically, Open Streets Days and other similar campaigns, could help to connect high-level plans – such as the City’s Transit Oriented Development approach that aims to challenge spatial divides – with people at a personal level. While the City has invested significant resources towards its approach, there is little to ensure that residents embrace or participate in, let alone influence, how it is rolled out. It is essential that we also build a process that ensures that communities take ownership of these initiatives – no matter how impossible this might seem.

There is a term for this kind of activism from social entrepreneurs or hybrid organisations like Open Streets – it’s called Systems Entrepreneurship.

Ncedisa Nkonyeni, who co-convenes a course on Social Entrepreneurship and Systems Change at the Bertha Centre for Social Innovation & Entrepreneurship at the UCT Graduate School of Business, says that systems entrepreneurs innovate at strategic points of the system to bring about a profound change in how that system operates. Co-convenor Cynthia Rayner cites Donella Meadows’s pioneering book, Thinking in Systems, to describe a system as ‘an interconnected set of elements that is coherently organised in a way that achieves something’. Rayner continues to say that, “Systems entrepreneurs seek to influence the way these elements connect – through changes in policies, power relations, and cross-sector relationships – all while working to find the leverage points to bring about a new way of doing things”.

Systems change represents a wholesale shift in the way systems work for tens of millions of people, calling up examples such as universal vaccine coverage and women's suffrage. These are the kind of shifts we need and this cannot be done without a 'unifying narrative'. We have to find and build connections on the understanding that we cannot live in our different factions working towards incompatible goals, thinking that our chances of success have nothing to do with the success of others.

At an individual level in South Africa it can be very difficult to connect with this sense of ‘common fate’ because there are so many basic things that people lack and the structural inequalities are so deeply embedded. Yet, it is only when we realise the power of a collective voice that structural change really becomes possible.