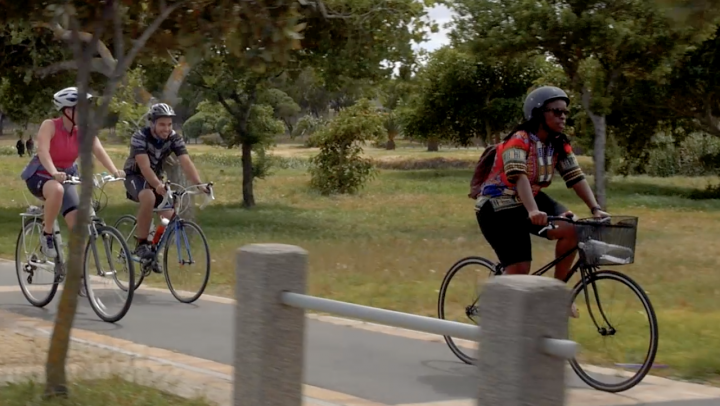 As congestion increases in Cape Town, the opportunity to shift how people commute also grows. Both government and civil society groups as well as the private sector have shown interest in exploring the potential of cycling and a new video by Open Streets Cape Town and local cycling advocacy groups highlights how ‘bike buses’ can be one of the solutions.

Says Rebecca Campbell from Open Streets, “getting people to cycle on a regular basis is not simple but we are fortunate to work with a group of passionate bicycle advocates who are encouraging people in different ways. We want to show that there are already lots of people using bicycles to get around Cape Town, and these numbers will keep increasing as more people join existing bike buses or organise their own.”

Cycling in groups provides safety in terms of visibility and reduces the risk of crime. In addition they provide peer-learning, support and encouragement, thus helping to create a culture that is more supportive and embracing of cycling as a form of transport.

Says Robert Vogel from the Pedal Power Association “cycling short distances is a powerful way to shift mobility at a city scale. For this to be possible, both public and private sector need to provide the infrastructure and incentives that can help us create a critical mass of commuting cyclists who ride, not only to work, but on a daily basis for all kinds of reasons.”

Open Streets received the financial and strategic support of the WWF Nedbank Green Trust during the past three years and experimented with different campaigns and concepts to encourage sustainable mobility. The concept of ‘bike buses’ which had been tested by others, not just in Cape Town but around the world, resonated strongly and has the potential to grow across the city.

Says Lebogang Mokwena, Cape Town’s Bicycle Mayor, “bike buses are a great way to get people to cycle more often; particularly for those who are not comfortable on busy city streets or who have recently learnt to cycle. It is easy and within our power to coordinate with neighbours and friends and change how we commute around the city”

Moreover, bike buses are a broader strategy to create a cycling culture in the city. Sipho Mona from Velokhaya states “Bike buses are the most hip way of people getting to know each other through two wheels and share ideas and engage in routes and knowledge about commuting and the bike itself.”

Government is also supportive of the concept and Premier Alan Winde often joins bike buses to show leadership and encourage others to do the same. He says, “There is an opportunity here to create a critical mass of commuting cyclists by organising bike buses in different parts of the city and we are eager to hear ways of supporting this type of citizen-led initiatives”

Various bike buses take place around Cape Town for people wanting to commute to work in the mornings. They are led by volunteer individuals. The potential to grow them is clear as well as to start new buses from other parts of the city.