Albert Road's potential to be universally accessible through street design

Talking Streets took to Albert Road to observe street design improvements aimed at pedestrian safety and accessibility for all users, especially those with special needs. 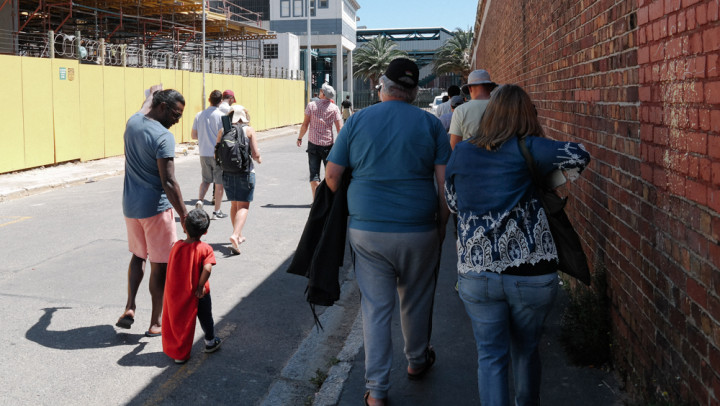 On Saturday, 25 November, we hosted our most recent Talking Streets walk. We discussed street design and universal access along Albert Road in collaboration with NOAH (Neighbourhood Old Age Homes), an organisation providing care and support to pensioners. Others in the group included residents, activists, built-environment professionals, property consultants and local business owners. The universal access approach to designing our streets means that all users, particularly those with special needs, are accommodated. To learn about universal design, read the principles described by UDAfrica, who were also there on the day.

In 2015, the City of Cape Town announced it would invest R36 million in the upgrading of 72 intersections in the CBD and surrounding neighbourhoods, including Woodstock. At the same time, we commenced our Streetiquette proof of concept in partnership with the Safely Home campaign of the Western Cape Government; which involved an amusing disruption of five busy CBD intersections by performing street artists directed by Mandisi Sindo, artistic director of Theatre4Change Therapeutic Theatre, and Jason Potgieter, director of Instant Arts Collective.

Two years later, we walked Albert Road to look at recently completed street improvements on that street. In line with its Universal Access Policy, the City of Cape Town expresses support for the incremental fixing and improvements of streets, and requires that all new investments in transport infrastructure be universally accessible. Sidewalks have been retrofitted with special features such as bump-outs, signal control, bollards, and widening sidewalks.

Universal access is an approach to street design that removes obstacles, creates flexibility in use, tolerates error, and requires low physical effort in use. Universal access was required of all bus rapid transport infrastructure built in anticipation for the FIFA 2010 World Cup, and is being rolled out across the country. In Cape Town, the 2011 Household Survey found that 15% of the city’s population, or 569 179 people, had disabilities, and 296 891 persons were categorised as severely disabled. Nearly half of all disabled people rely on public transport.

Participants recounted memories where wide-angle curbs give priority to speeding vehicles, whereas pedestrian safety is more likely to be achieved when curbs are designed more tightly, which forces vehicles to slow down. As such, these “bump-outs” have been constructed along Albert Road. Boyce, a pensioner in programmes of NOAH who walks Albert Road daily, said bump-outs have improved his walking experience, but also recounted daily infringements of vehicles parking illegally on these bump-outs.

A MyCiTi bus stop was also nearby, and we discussed the level of accessibility provided; from the “rib” and “button” tiles of the platform for the visually impaired, to the ease of transfer from sidewalk to vehicle.

We discussed the economic activities characteristic of Woodstock’s main roads, and the need of some businesses to trade onto the sidewalks. New bollards protect the widened sidewalks from illegal parking.

Walking around Davison Road, where the ten-storey Wex One is being constructed, we discussed the interface of Woodstock Station to the rest of the neighbourhood. The station does not cater well to special needs users, and the interface with a new mixed-use development with retail frontage was also considered. How do new buildings advance or deplete well-managed public space for the enjoyment of the public?

The Talking Streets walk also included a surprise street art tour with Ashley, a Woodstock resident. Ashley showed us the numerous local and international artists leaving their mark on a rapidly changing Woodstock.

Another stop on the walk included the setbacks and widening of sidewalks alongside new buildings. One observation of the group was that universal design should achieve system integration. In other words, the component parts of a street need to work together; sidewalks, building lines, consistency in surface quality, and gradients. A special needs user will likely choose the path of least resistance, even if their safety is compromised.

Download the group handout at the bottom of this page under "File attachments." 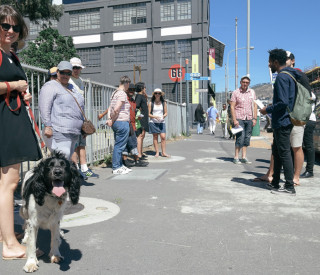 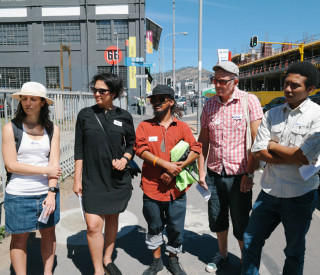 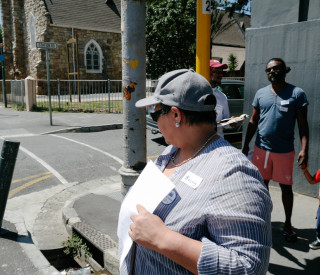 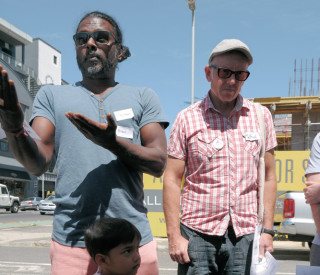 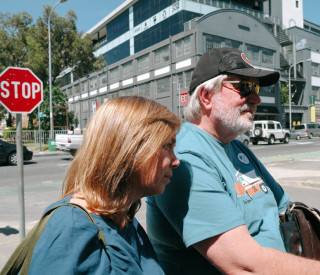 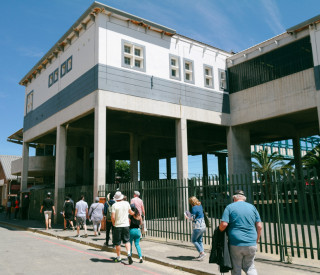 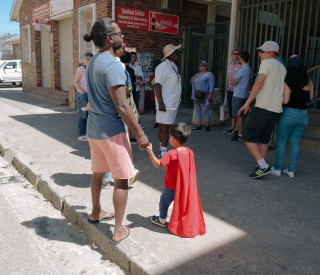 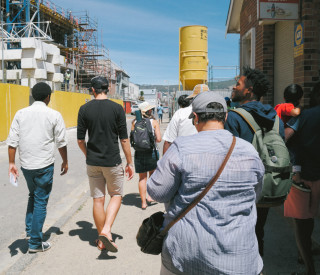 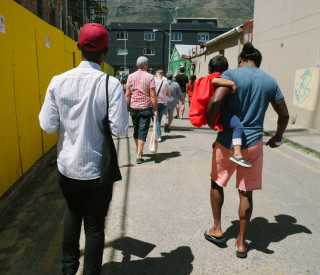 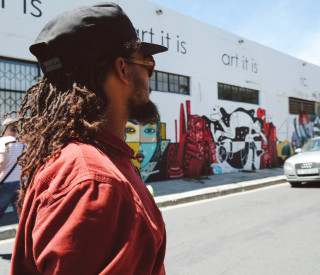 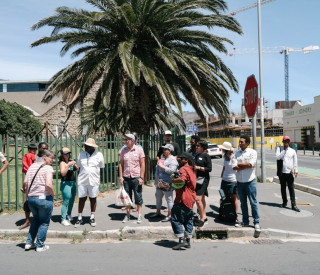 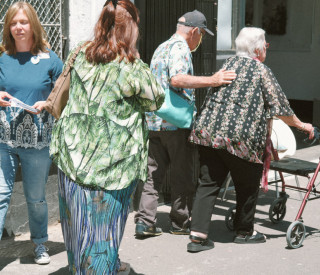 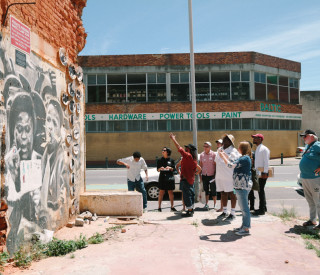 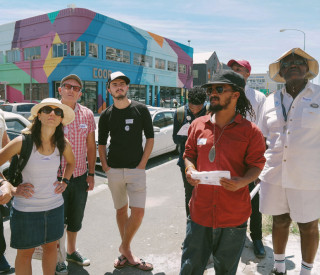 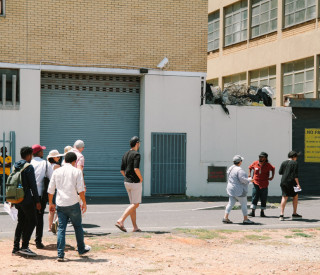 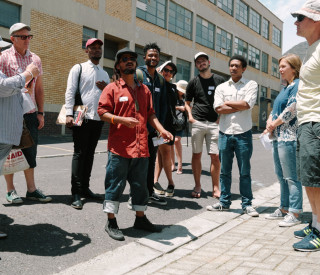 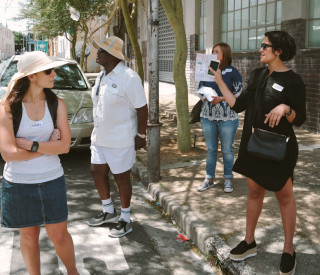 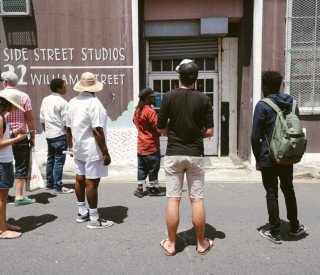 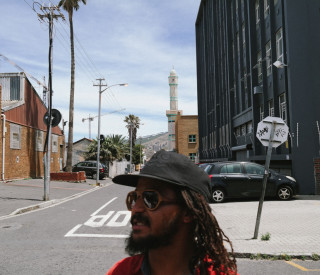 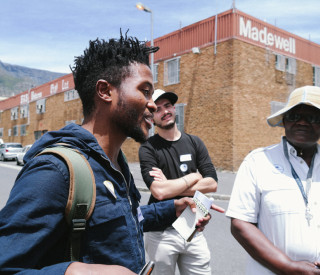