Why culture matters for transport planning

Talking Streets at Open Streets Mitchells Plain explored the disconnection between transport policy and culture, and the importance of factoring memory, creativity and social cohesion into transport planning and implementation. 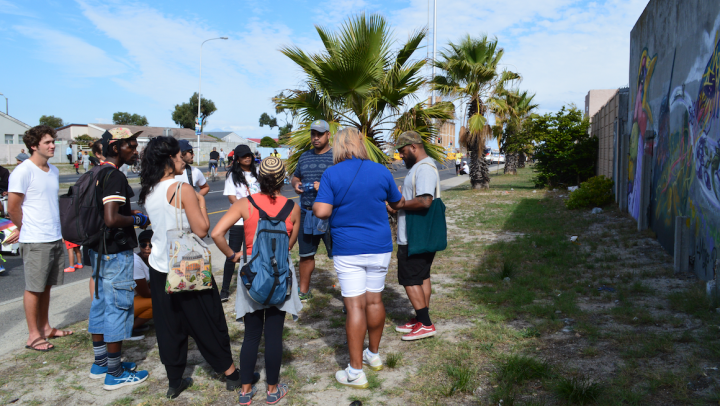 On Sunday 31 March, we hosted the last Talking Streets ‘walk & talk’ of the 2018/2019 season. During the walk, participants observed and discussed the missing links between culture and transport policy in the context of Mitchells Plain. While the term 'culture' was loosely defined in the discussion, the idea that places are the result of interaction between people and their environment as territories bearing history and meaning was somewhat agreed upon by the group and helped shape their inputs.

The group congregated in the middle of car-free Eisleben Road, which was transformed into Open Streets for the day, and began walking south towards the quieter side of the Open Streets route. The first stop was at a derelict open space along the road verge, and the second stop was further along Eisleben Road, adjacent to a large wall mural. The discussion was rich and highlighted important issues and ideas for making culture and transport planning more coherent in Mitchells Plain.

The walk and discussion was facilitated by Marco Morgan, an urbanist working to promote cultural spaces in Cape Town. A diverse group of participants joined the walk, including ward 78 councillor Eddie Andrews, representatives from the Mitchells Plain United Residents Association (MURA), the Plainsman local newspaper, and a number of other street enthusiasts.

The activity for Talking Streets Mitchells was simple, using the metaphor of a taxi driver and ‘gaaitjie’ interacting with passengers and passing a message and money forward. A ‘gaaitje’ was designated in the group and their job was to collect ideas and messages that would contribute to the route and progress of the ‘taxi’. Everyone was asked to think about what they would like to see for transport in the future, as a way of reflecting their own experiences, desires and fears in relation to mobility. These ideas were used to contribute to the conversation, and provided thoughts that could be taken forward through the Open Streets platform. 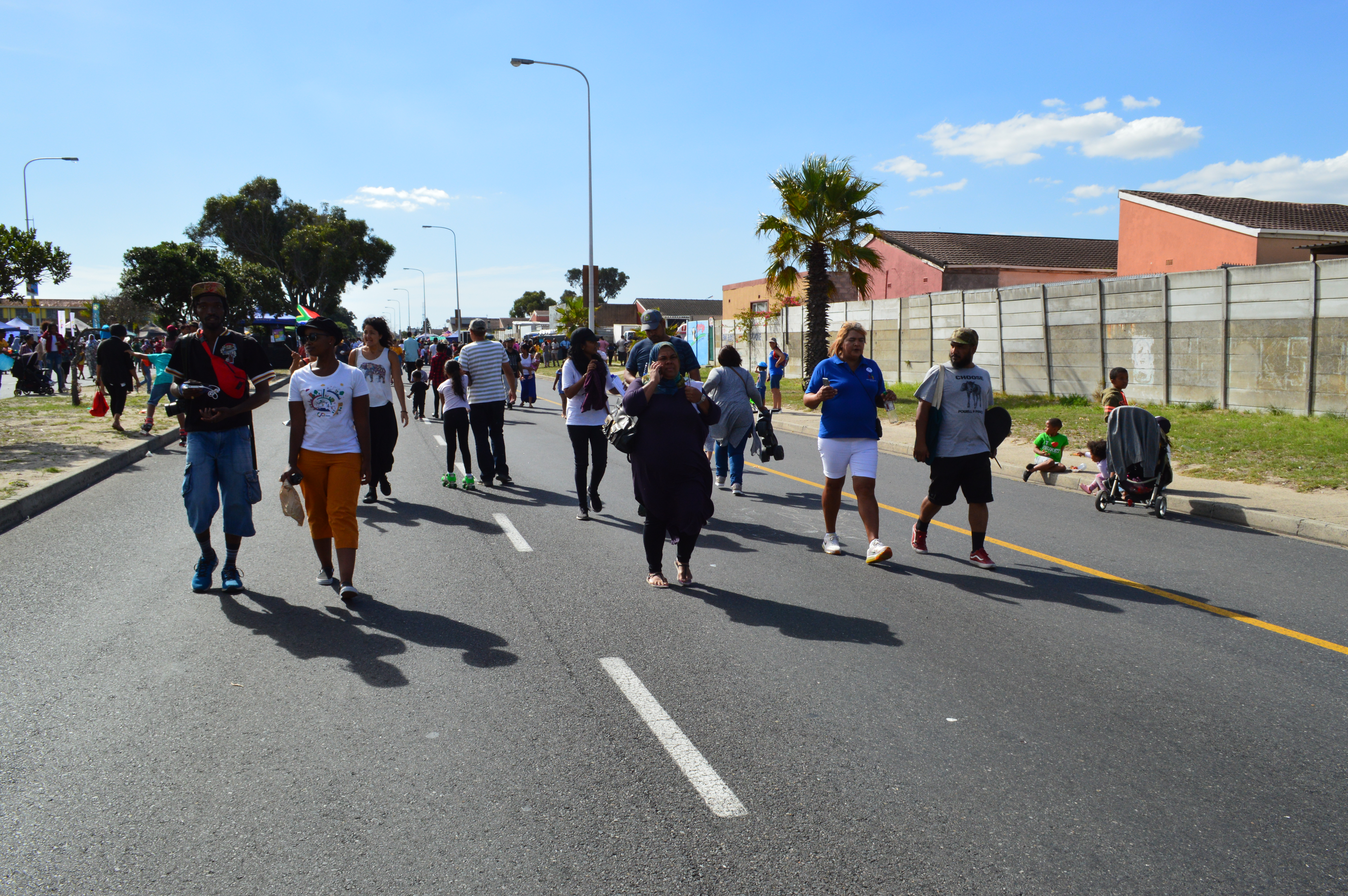 Understanding culture and the context of mobility

Marco introduced the concept of ‘culture’ as the interaction between people and space in a particular context. Participants reflected on how their own experiences, desires, fears and history define their culture and the way they move.

The Mitchells Plain residents spoke about the challenges that frame their culture and how this has an impact on their mobility choices and lived experiences. Mitchells Plain faces significant problems with unemployment, substance abuse, gang violence and the legacy of apartheid spatial planning. Although the people of Mitchells Plain suffer from significant social ills, community members remain resilient and resourceful, and aspire to a more positive future in Mitchells Plain. Deidre Peterson from MURA powerfully stated that "we want to be free to take a walk with our children. We need the freedom to go to the shop".

The disconnection between transport planning and culture

Marco provided a quote that emphasised the importance of factoring cultural considerations into transport planning:

“Cultural matters are integral parts of the lives we lead. If development can be seen as enhancement of our living standards, then efforts geared to development can hardly ignore the world of culture.” Amartya Sen.

Transport planning and implementation, as well as other urban developments in Cape Town, lack the mechanism to accurately speak to the needs of people in different contexts. Marco emphasised that policy makers need to start thinking about how and why people move, fear and desire in these spaces, in order to provide safe, efficient and accessible transport. Although all the participants essentially had a similar vision for transport in Cape Town (see images below), the necessary planning, implementation and understanding of these factors is context-specific.

The group discussed the new MyCiTi Phase 2A currently being implemented in the area, and agreed that the MyCiTi is a good example of policy-makers applying assumptions of what society might want, whilst excluding cultural and spatial contexts. One of the participants noted that the MyCiTi infrastructure cannot be an ‘island’ and that it needs to include the spatial context to connect safe corridors for pedestrians moving to and from the stations. Culture cannot be an afterthought in urban development.

The group agreed that transport infrastructure in Mitchells Plain needs to take on the approach of ‘building homes instead of houses’ by incorporating community creativity and going beyond the transport model of the global north. Mitchells Plain residents would like to see more engaging transport spaces, such as child-friendly pedestrian walkways and spaces that accommodate the needs of the disabled.

In order for culture to be incorporated into development planning, the community need to be properly consulted and understood. Mitchells Plain residents felt that the public participation process was not appropriate or inclusive, and lacked substance and the opportunity for community members to express their ideas and emotions.

Participants also mentioned that although the local government are at fault for poor communication and consultation, it was also the responsibility of individuals to get involved and take ownership or infrastructure and problems. Community organisations such as MURA play a significant role in the space, but more civic accountability and action is needed. 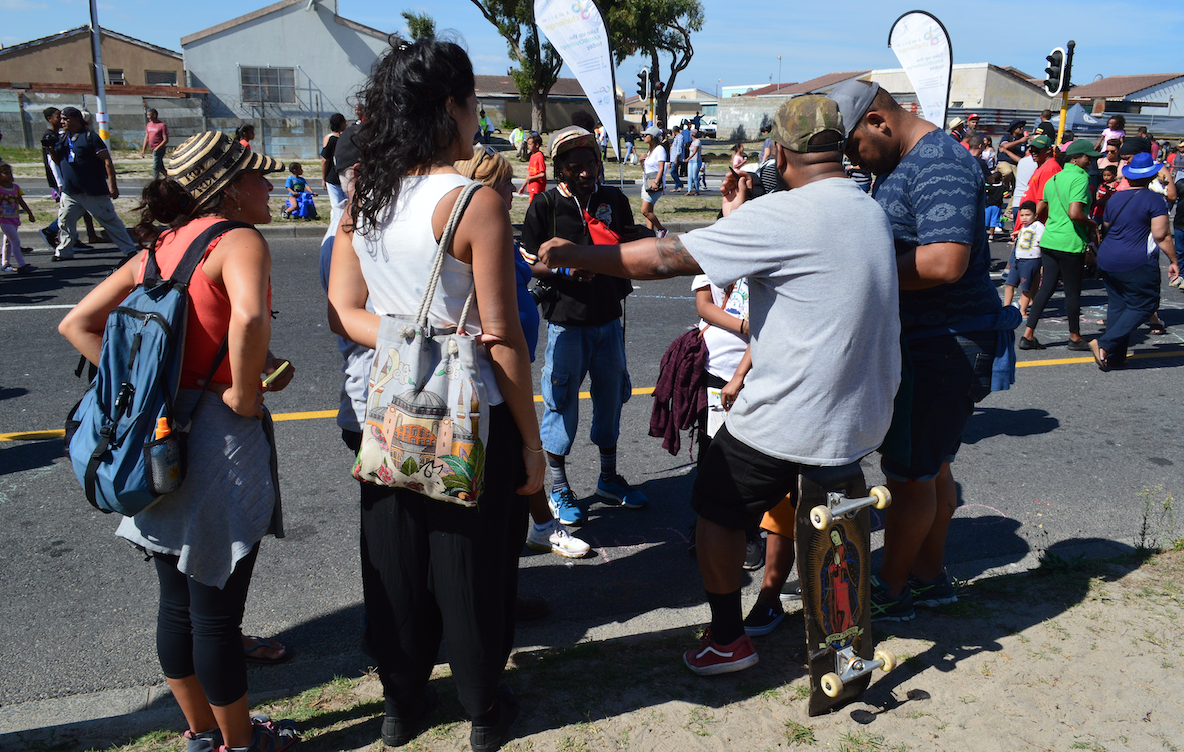 Open Streets as a platform to connect culture and mobility

Open Streets showcased a snapshot of the culture and connections in the vibrant community of Mitchells Plain, and provided the space for people to reflect their own desires in the street environment. Some of the participants suggested that Open Streets could play a more significant role in facilitating the engagement between local government and individuals. Councillor Andrews agreed with this sentiment and said that instead of individuals always reaching out to government, “government needs to meet people at the street and community level”. 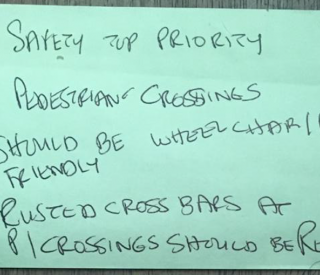 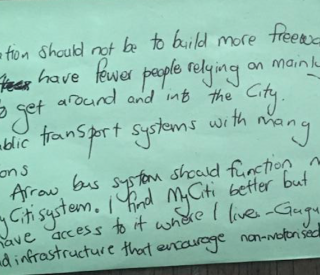 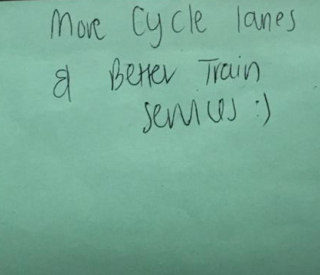 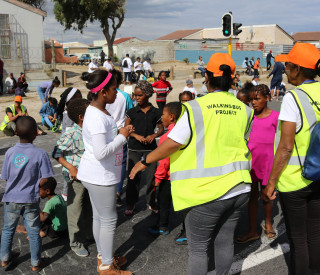