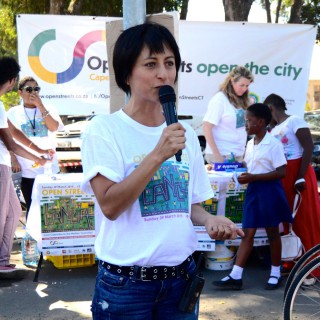 I am happiest when I am working at Open Streets.

I believe streets can bring people together. In a city with a history of division and segregation, an Open Streets programme could profoundly change how we relate to each other.

I am passionate about cities, public space and most importantly, people. Open Streets is a concept that resonates strongly because of my upbringing and the potential it has shown in Cape Town.  Born and raised in Bogota, Colombia, I lived in the US for most of my adult life before moving to South Africa in 2006. My academic background includes a Masters in Public Administration and International Affairs from Syracuse University. I have worked in policy and advocacy  for almost ten years in organisations that include The Carter Center, CIVICUS: World Alliance for Citizen Partcipation, and Fairtrade Africa. I am also a co-founder of SUR Collective, a platform for cultural exchange between Latin American and Sub-Saharan African countries and was a contributor to the African Centre for Cities? Serious Fun project in 2014.

Meet the rest of the team

We call on all current and past volunteers to send through their photo and bio to add to our wall of friendly faces.

Sign up and help change the way we use our streets.