Cycling as a fundamental right in our city

We are committed to the Cape Town cycling movement that many other groups and individuals have catalysed thus far. 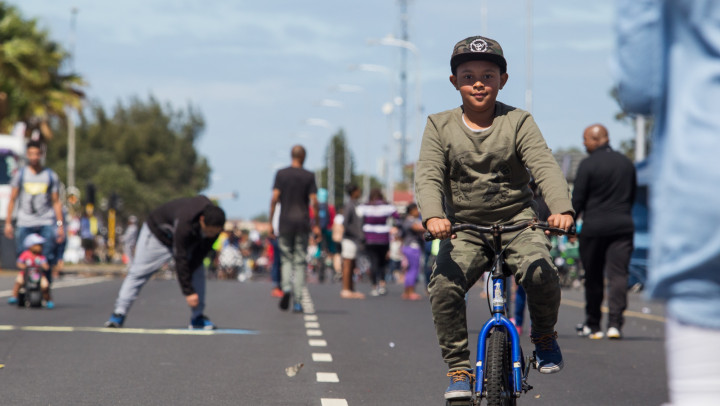 This article was first published on the Cape Times on 10 April, 2018.

Two weeks ago, we hosted one of our landmark Open Streets Days in Mitchell’s Plain – inviting members of the community and all of Cape Town to join us in reimagining streets  Eisleben Road, in this case) as shared public space. Having just one day for residents to use their streets as a safe place to cycle, walk, play and interact is essential because it reminds us that the streets are ours. It is also a reminder that our typical use of streets – cars only – is a direct apartheid legacy. Not only did apartheid planners divide communities with highways and roads, but they also ensured that the only people who would effectively be able to travel around the city were those who owned cars. Over 20 years later, the city and its streets still cater predominantly to car owners. If we are to demand a more equitable Cape Town, we must demand for our streets to be returned to communities.

We are committed to the Cape Town cycling movement that many other groups and individuals have catalysed thus far. The Bicycling Empowerment Network, also known as BEN Bikes, is an entire organisation dedicated to providing mostly disenfranchised communities access to opportunities through bicycles. Through its partnerships, BEN Bikes distributes bicycles to many community groups, including schools throughout the Western Cape, so that school children may develop cycling as an everyday habit from a young age. Another group, Velokhaya Cycling Academy Academy, uses cycling to involve children living in marginalised communities in a positive after-school activity Their aim is to use cycling as a way of imparting children skills such as commitment, determination, dedication and  teamwork. Together, all of our different groups are contributing to a larger movement of cycling as that which liberates.

Through our upcoming event, Street Minds: Making cycling an every day thing in Cape Town, we hope to create a space for academics, activists, artists, planners, technocrats, and ordinary citizens to come together to discuss the liberatory potentials of cycling as a mode of transport. In addition to participant-driven discussions, we will have Njogu Morgan and Lebogang Mokwena sharing their experiences as two people dedicated to cycling in their own unique ways. As someone who has written a PhD on cycling, Njogu will present on change dynamics in the use of the bicycle for everyday purposes in Amsterdam, Beijing, Chicago and Johannesburg over time. In doing so, he will reflect on why more or less inclusive cycling cultures have emerged across these geographies. And Lebo will reflect on her on-the-ground experiences of empowering people, particularly black women, to use bicycles in New York City and Cape Town. Collectively, we will envision how cycling might help us to emerge from apartheid legacies of street use and create new, inclusive ways for us to engage with the city and its streets.

At the centre of the cycling conversation is a question of access -–not just access to bicycles themselves, or fancy cycling tours, but access to moving throughout space on one’s own terms. When one pushes past all of the technical jargon surrounding the policy, infrastructure and bicycles that make cycling cities possible, a very simple, yet profound concept emerges: freedom. Cycling is unique from other modes of transportation because the rider is both the operator and the passenger. Cyclists craft their journey themselves, albeit limited by the infrastructure around them: highways, traffic jams, dangerous road conditions. Yet, the fact that we do see cyclists every day in this city is a testament to people’s resistance to the larger structures that seek to dictate how and when they travel. Every person on a bicycle is making a claim with their bodies, a claim to their right to move throughout the city on their own terms. No waiting in long taxi lines, or sitting on trains that are stuck on tracks for hours, or walking incredibly long distances to get home. There has to be another way.

When one understands cycling for all of its liberatory potentials, asking the question “Why should people care about cycling?” is essentially asking “Why should people care about crafting their own destinies?” We want cycling to be more than a recreational activity, or a luxury that only a small percentage can access. In dialogue and collaboration with the people of Cape Town, we wish to continue the hard work of many groups and reclaim cycling as a fundamental right, a mode of transportation by the people, for the people. In order to accomplish this, we must come together to unpack the histories of apartheid, the barriers people face that prevent them from cycling, and what a truly bottom-up vision of Cape Town as a cycling city would look like.

So, please join us on Saturday, 21 April at 6 Spin Street from 2pm to 5pm, so that we may do this important work together. The revolution begins at home, and on our bicycles. 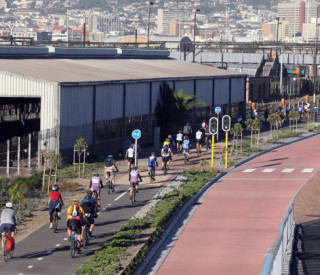