Get on your #Bike2Work this year

Will you make it your New Year’s resolution to join us on your bicycle on the road? 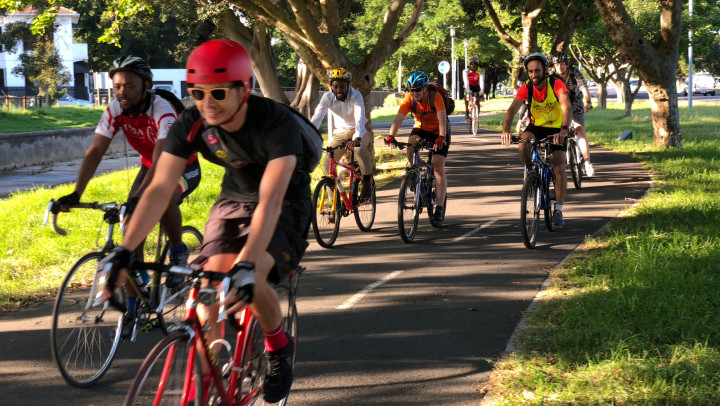 In 2019 we take off the training wheels of our low-carbon commuting campaign, #Bike2Work, and hand over the baton to independent bike bus champions. These champions lead daily rides to encourage mobility patterns that are sustainable, healthy and economical. Will you make it your New Year’s resolution to join us on the road?

Building on the work of Bicycle South, and with amazing practical support from Pedal Power Association and BEN Bikes, we launched #Bike2Work in April 2018, with the aim to encourage Capetonians to commute by bicycle. The programme consisted of organised bike buses; ie people who cycle to together on a set timetable and route, collecting passengers on the way. It’s a fun, safe and environmentally friendly way to get to work.

The programme has been hugely successful and enjoys the support of Cape Town’s bicycle mayor, Lebogang Mokwena, who says: “It’s my mission to diversify Cape Town’s cycling community and get more people from more backgrounds on bikes. To do this, we need initiatives such as #Bike2Work, which enable Capetonians from across the city to get together and cycle safely in groups. This will ultimately encourage commuter cycling, which is a City of Cape Town goal.”

#Bike2Work started with one route, from Claremont to the CBD, and now includes two more routes: Gugulethu to CBD and Table View to CBD. And in 2019, these bike buses will run every day, each “driven” by a #Bike2Work champion. They will lead the bike buses and communicate with the participants. OSCT will continue to support the campaign by helping these champions grow their bike buses.

Gugulethu to Cape Town CBD (via Athlone, Observatory and Woodstock)

Max is a bicycle commuter. He got into bicycles in 2015 when he was a barrister at The Way Out, a bike and coffee shop. In his first week of commuting, he took up one of toughest races in mountain biking, The 36ONE MTB Challenge. Since then he has commuted to work with pedal power every day. Max is very passionate about building a cycling culture in Gugulethu.

Jaco is a product manager and bicycle commuter. He has been cycling from home to work (Claremont to the V&A Waterfront) most days since October 2018 when he joined the #Bike2Work bike bus. His love for cycling started in 1997 when he would ride his bike to school and to deliver newspapers for extra money. He’s been mountain biking for exercise as well as commuting on bikes ever since. Jaco did over 628 #Bike2Work kilometres in 2018.

Jerome is an architect and interior designer. Known by many as “Jerome Hairy Legs”, he’s been commuting by bike since 1997 and did over 7 000km in 2018 alone. He’s also worked as a bicycle courier and reckons he can fix any broken bike.

An IT head at the City of Cape Town, Danie started commuting to work by bike around 2004 and does on average 8 000km to 9 000km per year. He also does road races and has been mountain biking competitively since 2011, participating in marathons, ultramarathons and stage races.

See you on the road!