MEDIA RELEASE: Transport Month is a chance to change how we move in our streets and cities

October is Transport Month, and we are using this annual event to encourage people to rethink how they use streets and move around the city. 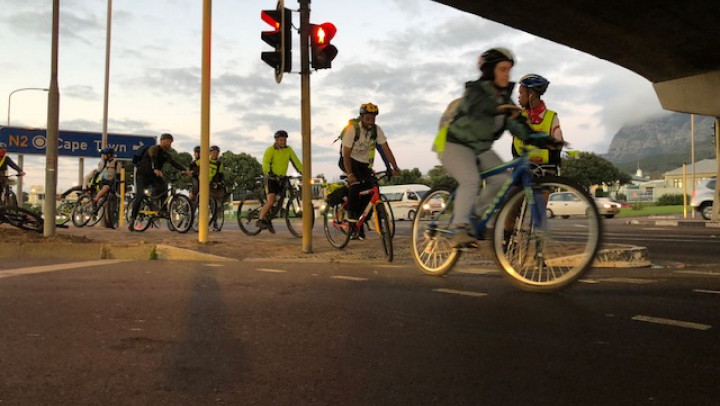 During Transport month we will be hosting various activities in partnership with Pedal Power Association, Bicycle South and Bicycling Empowerment Network to invite people to make a ‘transport resolution’ and cycle to work during October.

There will be weekly #Bike2Work bike buses from Claremont, Gugulethu and Table View happening every Friday during the month. The #Bike2Work initiative started in April this year. From one starting point in Claremont in April, the bike buses now leave from three different locations: Gugulethu, Table View and Claremont.

Anyone with a bicycle and helmet can join the bike buses. For those who don’t own a bicycle, Pedal Power Association and the Bicycling Empowerment Network will provide #Bike4All commuter bikes for participants to use for the bike bus rides (available on a limited first come, first served basis). In addition, these robust, single-speed utility bicycles can be purchased at a special offer of R500 during Transport Month.

“The intention is to inspire a love of cycling and to encourage people to choose bicycles as a preferred method of transport on an ongoing basis,” said Tim Mosdell, Managing Director of the Bicycling Empowerment Network.

Gordon Laing, member of the Pedal Power Association Exco and Bicycling Empowerment Network Board said: “We all need to take responsibility and make it safe for people to cycle. Bike Busses are a great way of helping people to feel safe whilst cycling. The #Bike2Work initiative is a good example of this and a start of how possible it is to use a bicycle as a mode of transport and how a bike can contribute to the livelihood and economy of cities, and to influence how they are designed for the future.”

The Bike2Work initiative has also attracted the support of prominent Capetonians who will be taking part during October. Each Friday the bike bus will be joined by a special guest who shares the desire to improve commuter cycling in Cape Town. These include: Minister Alan Winde, Minister of Economic Opportunities at the Western Cape Government and  Sebastiaan Messerschmidt, Consul General of the Kingdom of the Netherlands; amongst others. They are among a growing number of participants who have pledged to leave their cars at home and to cycle to work during the month.

The Open Streets movement has grown since the first car-free Open Streets Day held in Cape Town in 2013. The concept is expanding across Africa, too, with many cities seeking to learn valuable lessons from the local initiative to host Open Streets Days of their own.

To this end, Open Streets Cape Town will be hosting a learning exchange with representatives from 10 African countries, from 22-28 October, 2018. The objective is to facilitate a practical knowledge exchange between those working in the non-motorised transport (NMT) space and explore the potential for similar Open Streets initiatives in other African cities. The Open Streets Exchange is supported by UN-Habitat and Deutsche Gesellschaft für Internationale Zusammenarbeit (GIZ) through the Transformative Urban Mobility Initiative (TUMI) Challenge.

Taking place over a week, the Open Streets Exchange is designed as an interactive week for  streets enthusiasts working on place-making and sustainable mobility activities in their own contexts. The programme will draw on the knowledge that Open Streets has built over five years of operation in Cape Town, and will provide delegates with a working example to begin or continue implementation in their respective cities.

Open Streets Days are back

The Open Streets Days 2018-19 season kicks off in Woodstock on 28 October, as the culmination of the Transport Month activities. From 9am to 2pm, a 1,7km stretch of Sir Lowry/Victoria Road between Russell Street and Roodebloem Road will be closed off to motorised traffic and open to people to walk, play, skate, dance and reimagine the street as an inclusive and vibrant public space.

The series returns to various locations across Cape Town on the last Sunday of every month from October 2018 to April 2019, taking a break in December.

Open Streets Cape Town aims to radically increase the use and ownership of streets as public space to help bridge the social and spatial divides in Cape Town, and encourage us all to think differently about how we move around the city. 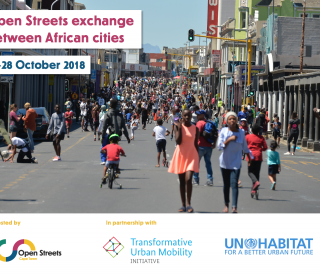